It's an action platformer, in which you have to run from the terrifying Dzikson. The Dzikson is slighty faster than you, so you need to find a clever way to get into the safety of your cave. Yet, you're running through a trackless wilderness, which is in itself full of different deadly obstacles. You have to use your stamina and meat to find a way to survive.

This game is created by Chinchilla Games, except for sounds effects and fonts:

This game is created for Summer Slow Jam.

wouah its though to switch between the command and not being confused...it required good timing and dissociation. No windows build ????

game doesn't start for me, it the screen just stays beige and I can hear the music but no button does anything

Hi, can you provide more details about it? Do you have JavaScript enabled? What browser do you use?

I'm on Chrome, I see the first screen appear normally (Loading and then Chinchilla Games) and when it fades out the music continues and nothing else happens. JavaScript is enabled.

I'm not a fan of artificially high difficulty due to bad controls but the game has pretty cool aesthetic and interesting idea.

Hello, thank you for your comment, we're working on it. I hope that the game will be more fun to play. The controls are limited due to the gamejam rules, yet we're trying to make them better. I'll inform you when we fix all isssues.

That's great you managed to improve it. Wish you luck in developing future games too!

Loving the art, concept, the death scream. In the middle of writing this, I realized you start with meat, I thought you had to collect it first. That certainly makes things easier.

That said, the not so intuitive controls wouldn't be as much an issue if the restart/continue was skippable and/or there were infinite lives. That'd be an awesome feature for those who wanted to git gud at the "bad" controls.

Level 4 had me beat. I honestly have no idea how I was able to get past just the beginning.

Hi, thank you for your comment! Yep, we know the issue and working on it, the game is still in development and we're fixing jumping. I'll send you a message when all problems will be solved. 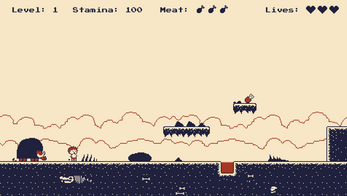 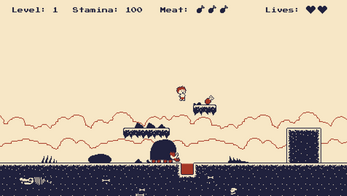 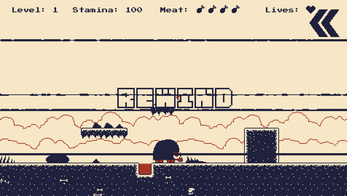